What "fierce beast" that roamed Pennsylvania woods became the mascot of
Penn State University in 1904? 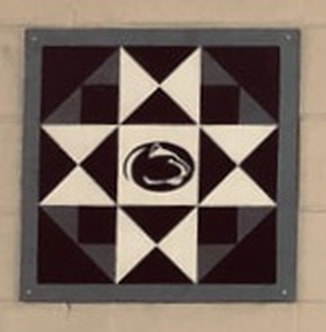 Joe Mason and the Mascot
​
The Nittany Lion as Penn State’s mascot originated with Harrison D. "Joe" Mason ’07. At a baseball game against Princeton in 1904, Mason and other members of Penn State’s team were shown a statue of Princeton's famous Bengal tiger as an indication of the merciless treatment they could expect to encounter on the field. Since Penn State lacked a mascot, Mason replied with an instant fabrication of the Nittany Lion, "fiercest beast of them all," who could overcome even the tiger. Penn State went on to defeat Princeton that day. Over the next few years, Mason's "Nittany Lion" won such widespread support among students, alumni, and fans that there was never any official vote on its adoption.

​The Nittany Lion is essentially an ordinary mountain lion (also known as a cougar, puma, or panther), a creature that roamed central Pennsylvania until the 1880s (although unconfirmed sightings continued long after that time). By attaching the prefix "Nittany" to this beast, Mason gave Penn State a unique symbol that no other college or university could claim. ("Penn State University Nittany Lion Mascot", 2006).